Orcival, founded in Paris in 1939,
has always made its authentic mariniere in France in its own factory. 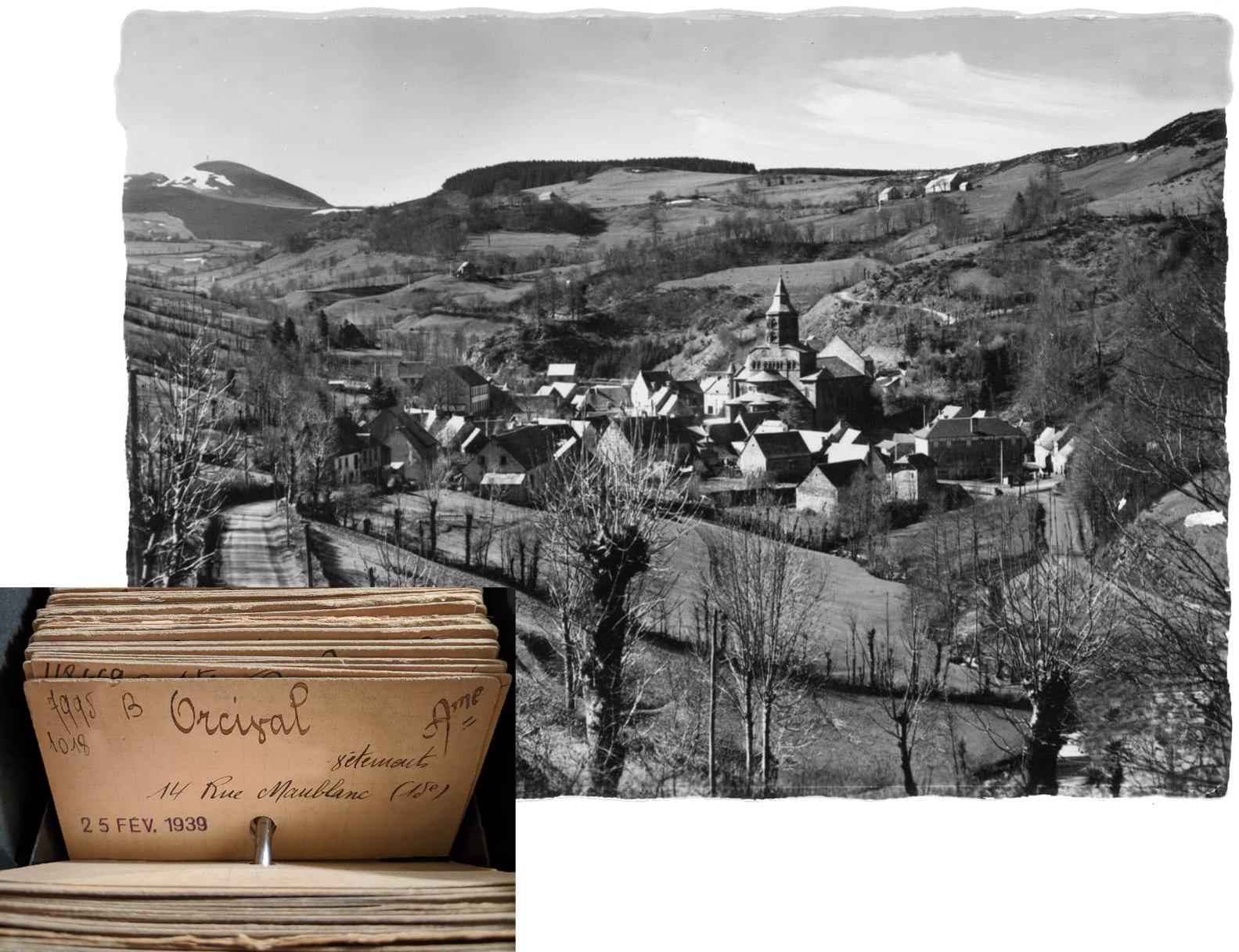 The brand alongside its iconic logotype were registered on April 1939 in Paris by Charles Bert, a seasoned silk and textile-factory manager.
Bert founded his firm at 62 years old, a very advanced age when the average life expectancy was 60 years old.

The factory was based in the 15th Arrondissement, in the previous premises of a slipper factory.
The production was managed by a couple from Lyon that Bert got come to Paris specially to assist him: Claudius Béjui as the director of the factory and his wife Emilie as the forewoman.
The name of the brand comes from a beautiful little French village in the Auvergne region, that Charles Bert cherished.

As the war was looming ahead, Charles Bert faced many troubles to keep the activity going through; plus, his right-hand Claudius Béjui and Emilie, as Jewish people, were jeopardized by the Nazi invasion.
He then decided to transfer his firm to South, in Lyon, where many silk firms were historically established, on the 29th of April.

History proved him right as the German invasion occurred a couple weeks later, and Paris was occupied on the 14th of June, 15 days after Charles Bert finally moved to Lyon.
Charles Bert was born in Lyon where he supplied in silks & cotton fabrics, jerseys, so he joined his suppliers … and Orcival became definitely a downtown Lyon-based firm.

Far from the occupation the Béjuis worked their way hard to give Orcival a reputation for quality products, thanks to their management skills and savoir-faire. 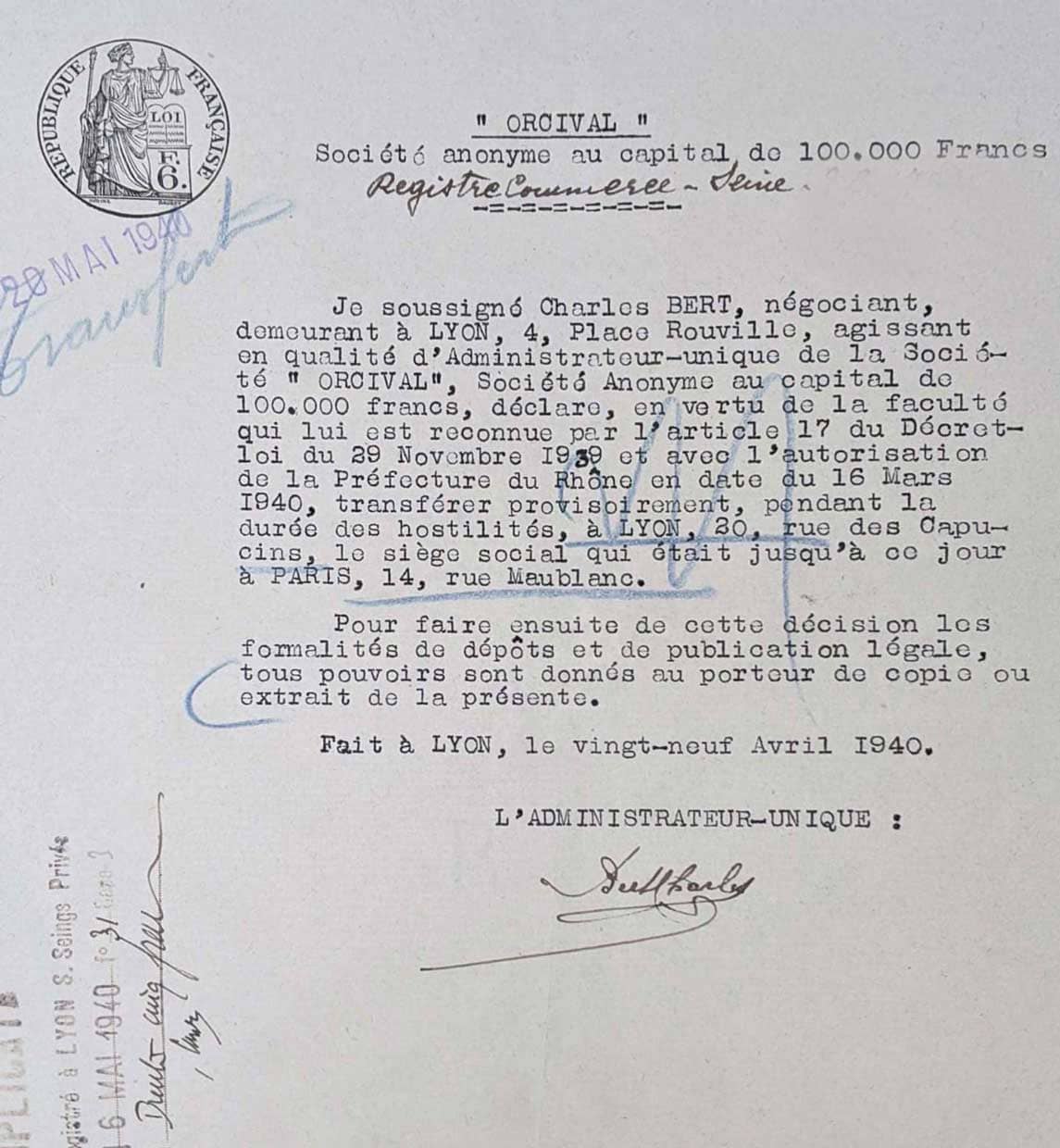 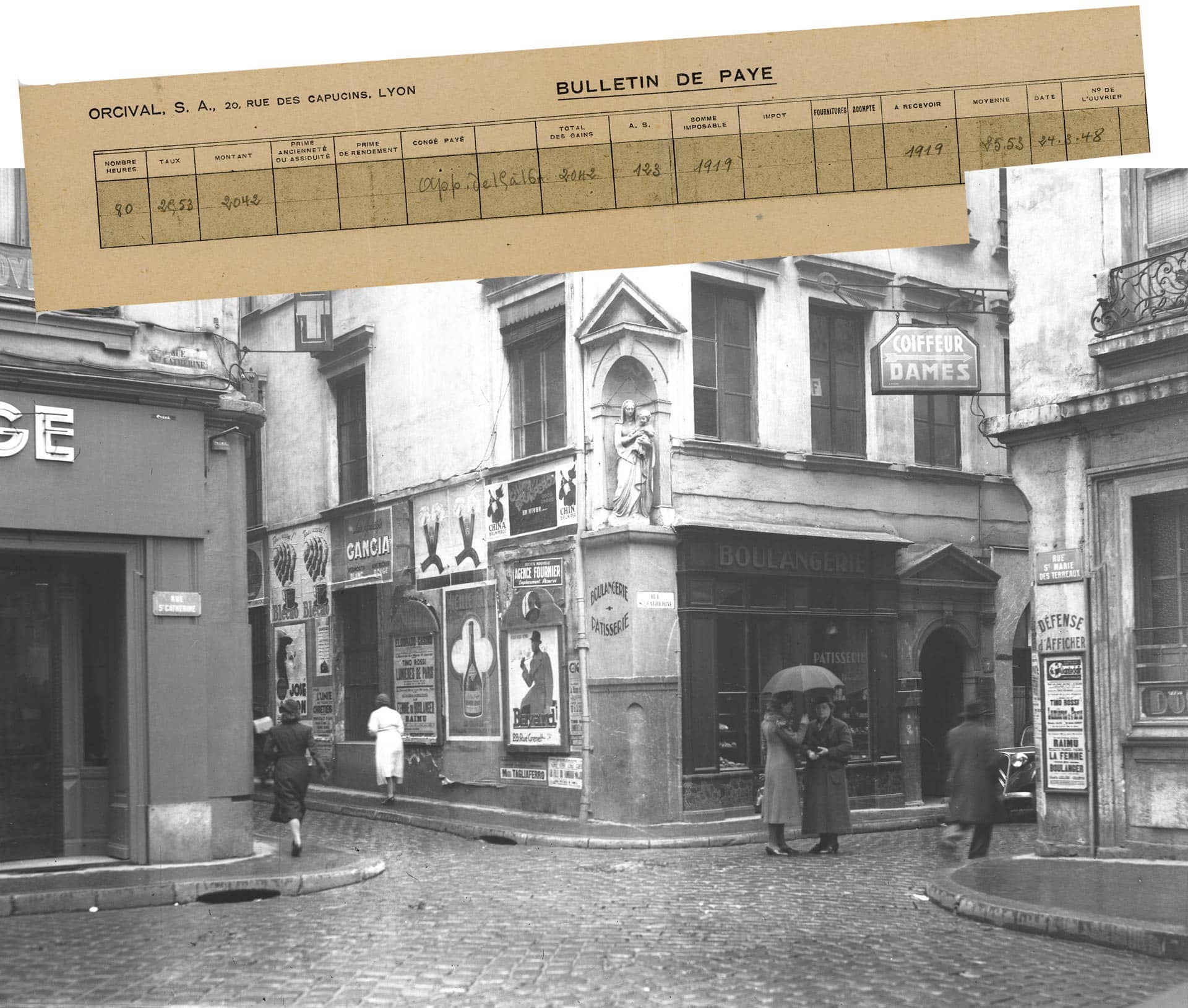 Charles Bert, already very old, ends up selling his firm to an old friend from draft: Colonel Pierre Clayette, nephew of Henri Bertrand.
At this time the Bertrand/Clayette family could not be ignored in the silk industry and tremendously powerful since the 19th century. It's the most important silk family in Lyon and in France.

Unfortunately, the colonel died in june 1944, leaving the saddles to his two sons, Joseph (specialized in silkworms’ production) and Robert (specialized in manufacturing): it was up to them to write the story of Orcival.
As planned with their father, they acquired some Rachel looms, put in the basement of the factory, to expand the activity after war; this was Orcival could knit directly the fabric the firm needed. In 1947 the firm began to knit itself the famous Marine Nationale jersey for the French Navy. Later, a new loom arrived to enable the brothers to weave heavy combed jersey with the open-end technology.

But, at the 20 rue des Capucins, room was quickly needed as the activity sky-rocketed. So, the Clayette brothers decided to move one block away in 1948 to 3 rue Sainte Marie des Terreaux, becoming the famous location of the brand. This address can be found on the tags of Orcival tote-bags.
The brothers also invested in advertising, hiring famous post-war advertising-illustrators.

Orcival, thanks to its quality products and the fame of the Clayette family, became renowned in the late 1950’s in the domestic market and became an important supplier of the French Navy, as the wars and military services required a large amount of tops, given each sailors had his own top plus spare ones.
In the 60’s, the brothers broke new grounds with taping the consumer market, becoming one of the first brand to supply consumers, when many of its current competitors only began in the late 70’s.
Orcival has quickly established itself among consumers as the historical brand of the authentic marinière.
In 1962, the sailor fashion was booming with the first collection of Yves Saint Laurent including his restyled peacoat, & marinière!

In the early 70’s, Henri Robert, relative of Charles Bert and commercial head of the Clayettes since 1950, took over Orcival. He focused mainly on the growth of consumer market segment, as leisure industry soared and holiday-makers dressed in sailor shirts. But in the 80’s, due to the economic downturns and as the mainstream sailor fashion dropped, the brand faced difficulties.

Henri Robert retired and sold the firm in 1993 to M. Rolland, the owner of an orthopaedic fabric factory, who kept manufacturing in Lyon Marine Nationale striped shirts for the Navy (as long as the Navy outsourced abroad its supply of tops) and some famous clients in Paris, and maintained the historic looms in good shape.
In the next decade he sold the firm to the Beerens family who brought new life to the brand while bringing the exportations up. The quality is the cornerstone of the strategy. 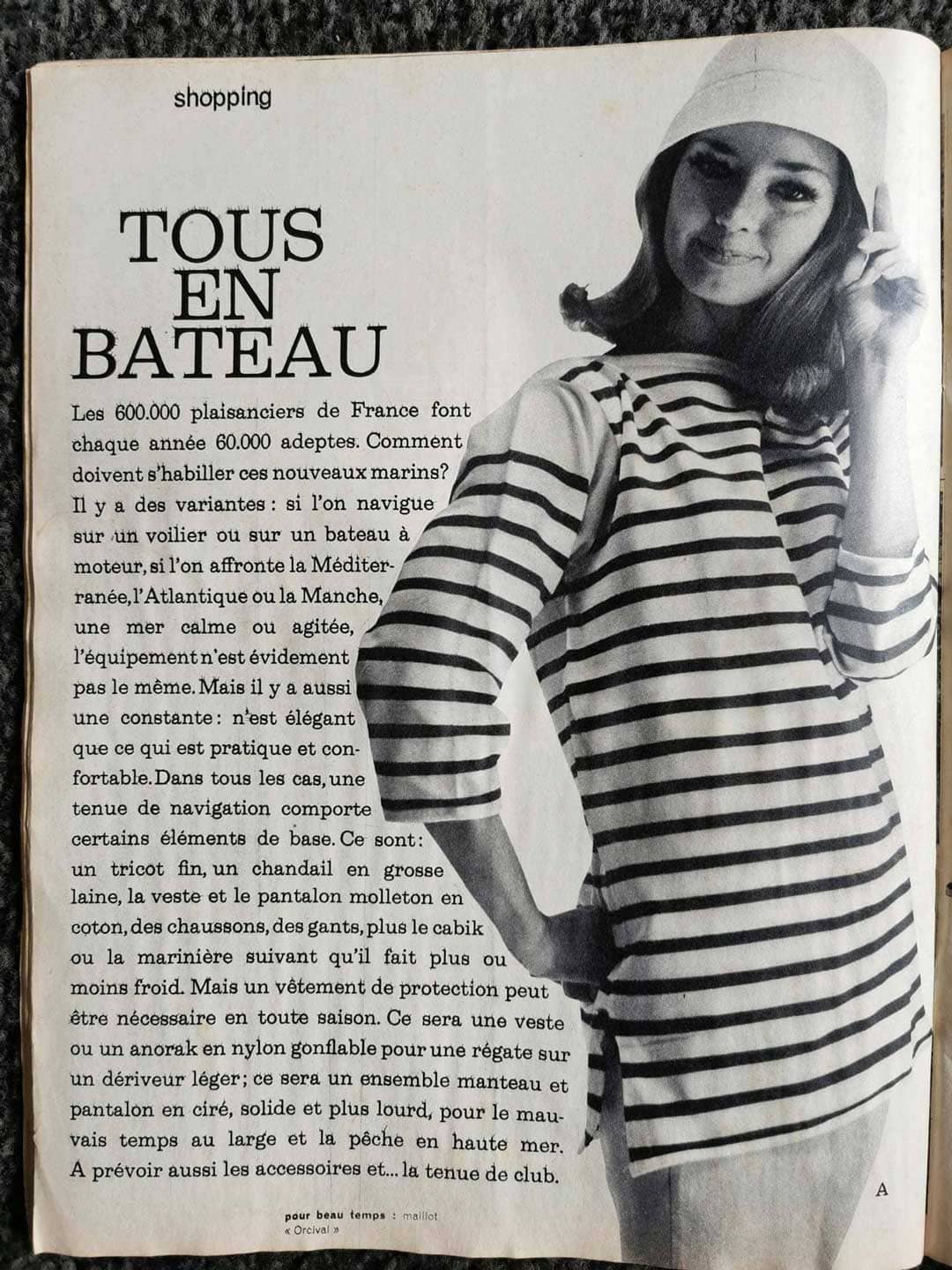 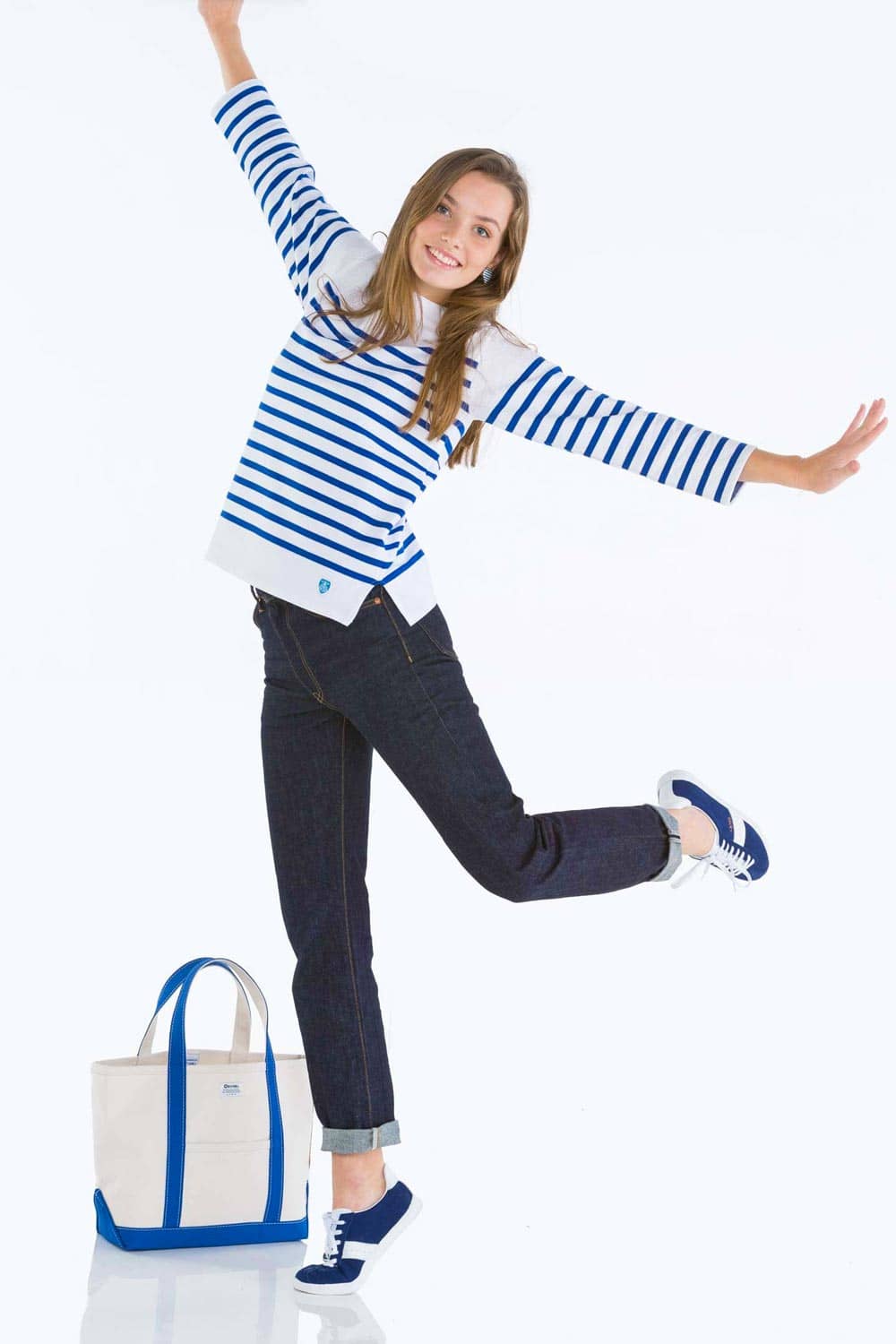 Under the new family leadership, Orcival came back in the game.
When nobody believed anymore in genuine brands and products, while outsourcing was the new black, Orcival met a growing demand abroad for timeless, authentic and made in France garments epitomizing the French touch.

City boys and girls looking for meaningful products targeted Orcival and its strong identity, commitment to quality and indisputable savoir-faire.

THE Famous MoMA of NY carried out in 2017 an exhibition named: «Is fashion modern?».
It intended to showcase 111 fashion items, representing all culture across the continents.
The goal being to explore the past and the fashion actuality through 111 historical and timeless pieces like jeans, a few luxury designer dresses and... the iconic French sailor shirt.
As an iconic staple of French dressing, the MoMA decided to showcase the genuine French marinière. After research, the museum pinned out Orcival as the authentic brand.
Orcival lent for the exhibition one genuine marinière “Marine NATIONALE” of the 60’s with the inside authentic marking in black ink figuring the sailor’s ID number, enabling him to recognize his top. The times of consecration has come.
Today, Orcival is sold in the best select shops valuing its unique history. The brand preferring select-shops to volumes. The sailor t-shirt is a sustainable and a historical garment, made to last from 1939, in opposition to the fast-fashion garments of the last decades. 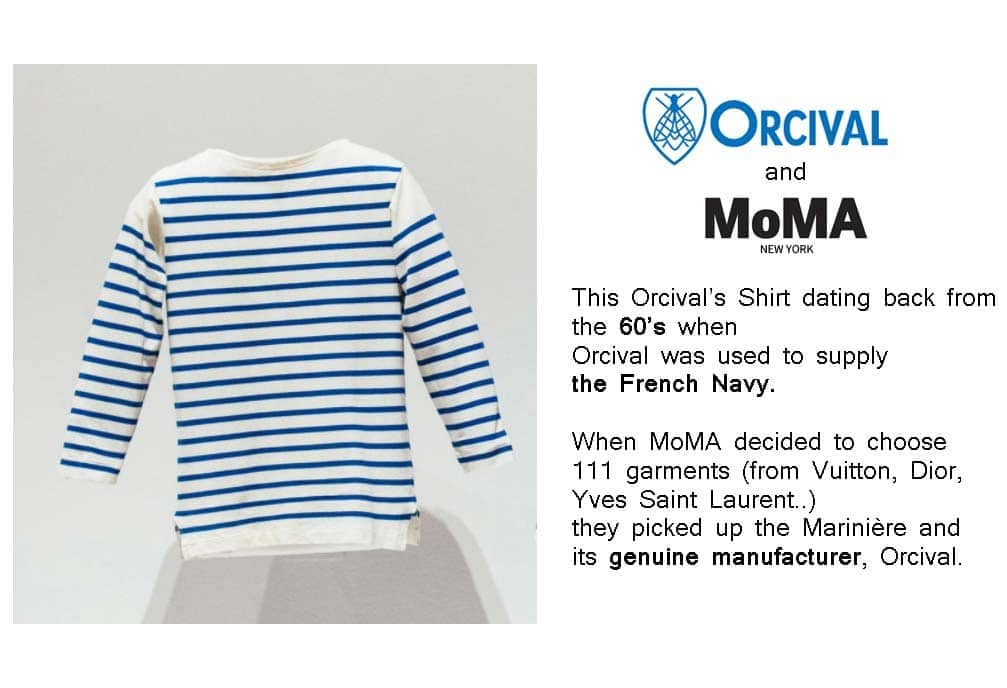 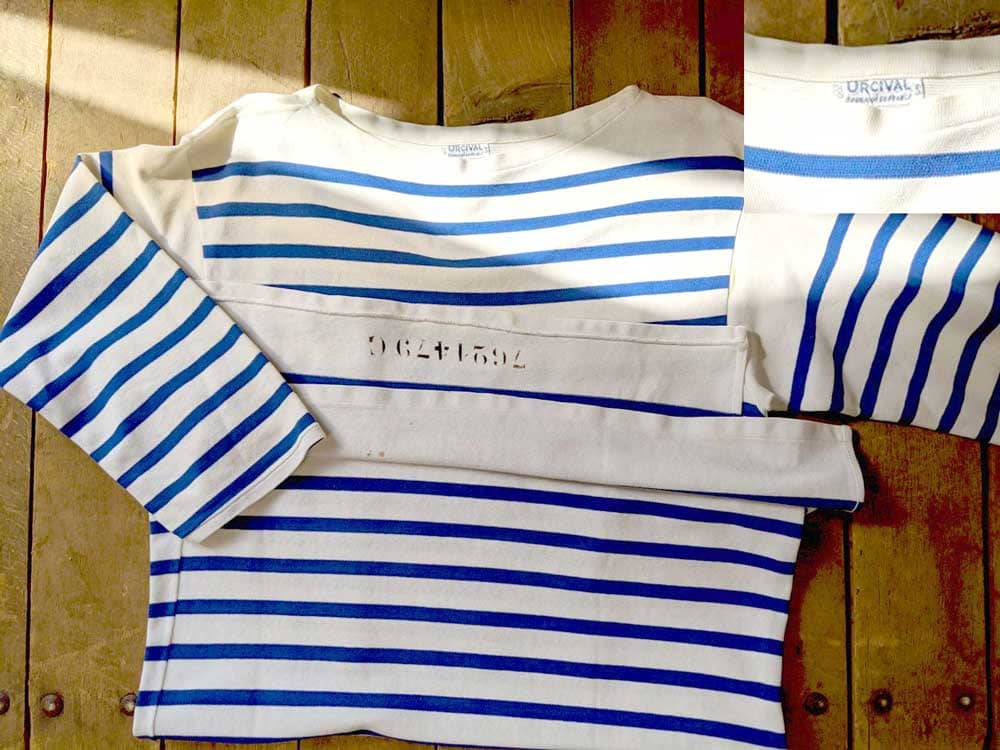